This weekend I revisited Kevin McCann's monograph Food Webs because I was reminding myself how it is exactly that we scale from 2- to n-species in dynamic models.

As I was reading through the introductory chapter on dynamic modeling and because I am now enjoying the animations I can create in R, I decided to recreate the example form a subsection on Hopf bifurcations, since I don't think I've ever created them in R. The idea goes a little something like this:

The Rosenzweig-MacArthur consumer-resource model has been extensively studied. One of the most interesting findings is that the behaviour of the model can shift, depending on the attack rate, \( a \) (parameter values below). It turns out that if \( a \) is small (< 1.25), then there is a single attracting equilibrium point for the predators and prey, with the prey at carrying capacity \( (H = 2) \) and the predator extinct \( (P = 0) \). If \( a \) is between 1.25 and 1.38, then there is a single stable equilibrium point. If \( a \) is between 1.38 and 1.68, then the stable equilibrium point still exists, but it is a stable focus, where trajectories approach through dampened cycles. And last, if \( a \) is greater than 1.68, then the populations cycle as a stable limit cycle.

The phase plane was created using custom functions that I modified from the R package phaseR. The arrows represent the direction field, which corresponds to the direction that the trajectory of prey and predators will change over time (e.g., the next time step). The dashed color lines are the zero-growth isoclines (i.e., nullclines), which represent the values for which each of the variables do not change \( \partial X_i / \partial f_i(X_i, Y_i) = 0 \). Where the zero-growth isoclines intersect is where neither of the variables change, and are hence equilibria. The black point is a an example trajectory that I began at \( (H = 0.5, P = 0.2) \) and ran for 200 time steps to see the dynamics in phase space.

The time series plot was created using a differential equation solver in R, deSolve. This plot shows the same values as the phase plane, with initial values of prey and predator respectively 0.5 and 0.2, over 200 time steps, and with the densities of prey and predators being red and blue. This is another way of visualizing the dynamics above, that others find more intuitive. 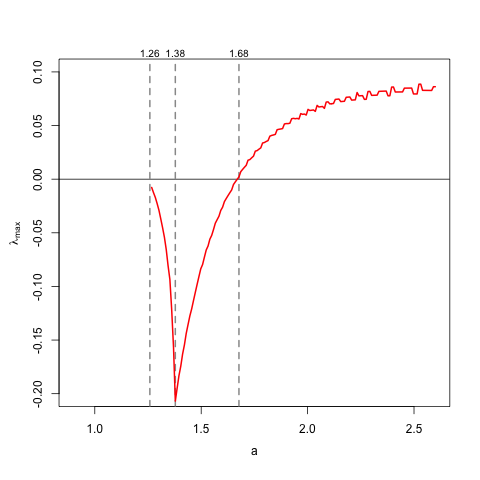