Today for lab meeting, we were asked to attempt to define `stochasticity' for a guest blog post that Karen will be writing for the Dynamic Ecology blog. Immediately below I have what I wrote before the meeting, followed by some afterthoughts.

My definition of `stochasticity' before lab meeting

When asked to define `stochasticity' in biology, my knee-jerk reaction is not a stand-alone, autonomous definition; but rather, a definition contrasting stochasticity against its ostensible diametric opposite--determinism. This dichotomy is, of course, false, as central to most modern philosophical and scientific concepts of determinism is the idea of certainty, which is never exact in the real-world and makes our understanding of stochasticity and determinism much less distinguishable.

But to proceed on what stochasticity is instead of is not, I posit that `stochasticity' duplicitously describes the inexactness of nature. Inexactness simply describes the probabilistic essence of science conducted by the non-omniscient. The duplicity of stochasticity foremost describes my observation that stochasticity used in two qualitatively different ways--deductively and inductively--and secondly describes how stochasticity is sometimes used as a scapegoat, which may teeter a somewhat deceitful line. The deductive studying of the inexactness of celestial motion and the motion of pollen in water gave us our first descriptions of what we now call stochastic processes, and we describe natural phenomena the same way to this day. That is, we often make measurements that generate responses that have some variance greater than zero, which is attributed to lower-level processes through deductive reasoning. (Note that high-level processes are often not attributed to variance in data because those processes occur at spatiotemporal scales invariant with respect to scales at which experiments commonly take place.) From an inductive perspective, following the mathematical formulation of stochastic processes, ecologists have also used inexactness to to predict nature. Lastly, I used duplicity to describe the use of stochasticity in ecology. This is because stochasticity is confounded with error, which can include all types of errors, irrespective of how that error is valued--e.g., observer error (OK), statistical error (OK), experimental error (mostly bad), environmental error (can be bad, but out of experimenter's control).

I also included a figure that is supposed to describe the effects of levels of organization (lower, bottom; higher, top) compared to the effects (small; left, large; right) at that level. As one moves up on organization, the importance of the lower-level processes decline and are still present at higher levels, but negligible. This may not hold too much water, but I thought I'd at least post it since it's aesthetically pleasing. 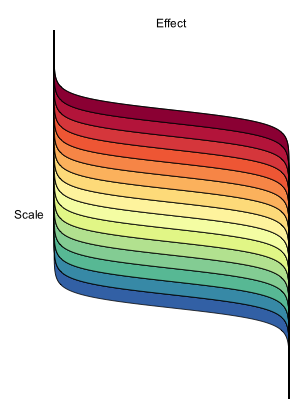 My understanding of `stochasticity' after lab meeting

We had a good group discussion. I think that one of the main points centered around how stochasticity is used in ecology: (i) for mathematical modeling and (ii) statistical inference. Even though I didn't bring this up in discussion, I felt like my observation of the use of stochasticity above in terms of inductive and deductive reasoning meshed well with points with mathematically modeling and statistically inferring stochasticity. We mathematically model stochasticity inductively by creating a set of rules and definitions that leads to a probabilistic output. If we're lucky, there are systems amenable to repeatable experimentation that have the same parameters that will generate outcomes that we can test against the model. Similarly, we also take observed data and statistically pull out stochasticity that we attribute to various processes as a form of deductive inference.

We didn't come to grand conclusions or decide that stochasticity is just a fancy word for `randomness.' We definitely agreed that there should be a term for the inexact measurement of patterns due to higher- and lower-level processes. Hopefully other ecologists will come to understand the disparate use of the term and specifically address specifically what they mean by stochastic when they use the term.